Why, you may well be asking, have I chosen ‘The Three Hares’ as the title for this blog?  I confess, it’s a bit of a self-indulgence.  It has to be called something, so it may as well be something I’m passionate about!

The motif of the three hares has fascinated me ever since I first encountered it, and I have been intrigued by its mysterious history and ambiguous meaning.  The motif consists of three hares (or possibly rabbits, in some cases) running in a circle, either clockwise or anti-clockwise, with each hare having two ears – but there are only three ears in total.  The ears form a triangle at the centre of the design (very occasionally, there are four hares sharing four ears, which form a square at the centre).

I first came across them in Devon, where there are nearly 20 examples of medieval roof bosses featuring the three hares in churches across the county.  (They are sometimes called “Tinners’ Rabbits” in the Dartmoor area, but this seems to be a bit of a red herring, as the origins of the motif are much older).

So, first, the history:  the earliest examples have been found in caves in China, which are believed to be early 6th century.  The theory is that the motif travelled west along the Silk Road, appearing in southern Russia, Iran, eastern Europe, Germany, France, Switzerland, and finally crossing the Channel to England and Wales in the early 14th century.  The hares transcend religious traditions, from Buddhism, through the Islamic world (where the motif appears on metalwork, glass, ceramics and textiles), Judaism (18th century synagogues in Germany have the motif, alongside the riddle “Three hares sharing three ears, yet every one of them has two”) to Christianity (they feature in churches across Western Europe).

The meaning is much more mysterious than the history.  Hares have had many associations, including as a symbol for resurrection in Chinese mythology.  The hare was the animal associated with the pagan goddess Oestara, along with the moon, possibly because the hare was believed (erroneously!) to have a gestation period of 28 days.  This association may account for the naming of the female cycle (oestrus) and the principal female hormone (oestrogen).  This female imagery may be the reason that the three hares are often found juxtaposed with the Green Man in English examples.  In another legend, the hare was believed to have laid the Cosmic Egg, which may be the precursor of the idea of the Easter Bunny, and Easter eggs!  And latterly, the three hares were believed to be a symbol of the Christian Trinity.

I leave you with my own interpretation, in a linocut print, of the three hares and moon motif, which is the logo for this blog, and some links to articles which have informed my understanding of the three hares and which you may find interesting.  If you are really lucky, you may manage to track down a copy of The Three Hares: A curiosity worth regarding by Tom Greeves, Chris Chapman and Sue Andrew, published by Skerryvore Productions but now sadly out of print – if you do, can I please borrow it?! 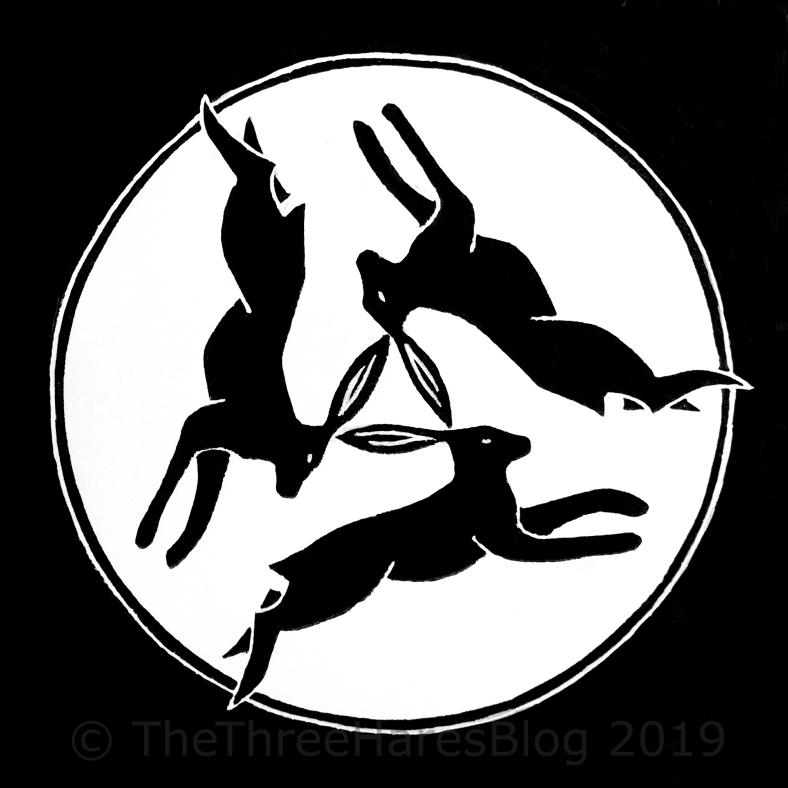 An artist’s blog about the three hares

The three hares as a Chines puzzle