I wonder how many of you regard a day’s professional development as a self-indulgence?  I suspect it may be something unique to writers and other creatives, but I was struck by the use of the words ‘self-indulgence’ no fewer than three times in the first hour of Saturday’s event at the National Centre for Writing.  It seems that a lot of us have difficultly permitting ourselves the investment of time and money into our development as writers.

The National Centre for Writing (formerly the Writers’ Centre Norwich) is based at Dragon Hall on King Street in Norwich, and provides resources, mentoring and events for writers – both online and face to face.  Saturday’s event was entitled The Writer’s Roadmap, and took place in the great hall, upstairs at Dragon Hall.  The wonderful Florence Reynolds is the Programme Officer, and welcomed us to a superbly organised day in a unique venue. 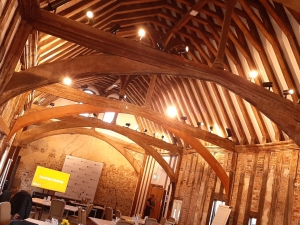 I should warn you (if you haven’t already gathered from elsewhere in this blog) that I am something of a medieval history nerd, so spending a day in Dragon Hall was, frankly, distracting!  According to the Dragon Hall website, there has been a building on this site for more than a thousand years – Florence told me that there is evidence of a Saxon post hut beneath the undercroft.  The present building was built around 1430 by a merchant, Robert Toppes, although one of the outbuildings is believed to be a century older.  Originally a trading hall, it backed on to the River Wensum, which via the River Yare gave access to the North Sea at Great Yarmouth.  It was part of Norwich’s major role in the trading of wool and textiles, especially to and from the Low Countries, during the middle ages, on which the wealth of East Anglia was built.  Now a Grade I listed building, parts of it have at various points been houses, tenements (housing up to 150 people in the 19th century), a pub, a butchers, and the rectory for nearby St Julian’s Church (of which more later). 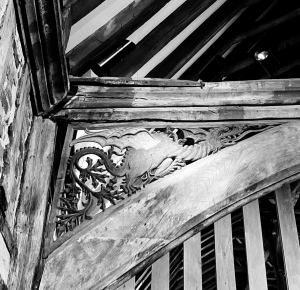 We were upstairs in the Great Hall, where the one remaining carved dragon (there were 14 originally) has been rescued from under a pile of rubbish in an outbuilding, restored, and put back where it belongs in the beams of the splendid roof.  Another treat was the remnants of Victorian wallpaper, which Florence pointed out.  It’s lovely that NCW are so evidently proud of the building, and great to see that it’s in daily use and living again. 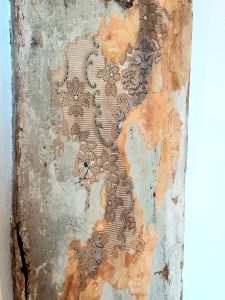 The event was both enjoyable and very useful, an opportunity to meet with other writers (we tend to be a fairly solitary lot) and also to get some high-quality input from writers with a wide range of experience.  Molly Naylor, who described herself has having a portfolio career which includes poetry as well as writing for stage and screen, spoke about working across boundaries of genre, and the importance of finding our unique ‘voice’.  Victoria Adukwei Bulley spoke about opportunities for residencies and commissions, and showed us some of the output from her residency at the V&A.

But the highlight for me was Edward Parnell, who took us through his experiences with getting his first (prizewinning) novel published and then moving, almost by accident, into creative non-fiction.  As a writer of non-fiction, I often feel that writers’ events and courses aren’t really for me as they tend to focus on fiction and/or poetry (very occasionally scriptwriting) but never non-fiction.  It was a treat to be at something which was explicitly for writers like me – and as well as being an engaging speaker, Edward was generous with his time, staying around to chat afterwards (and signing a copy of his non-fiction book, Ghostland, for me!).

At lunchtime I went exploring.  The Church of St Julian is literally across the road from Dragon Hall, and I had intended visiting many times when in Norwich but never quite got around to it because it’s a little way from the city centre.  This is the place where the woman known as Mother Julian or Julian of Norwich lived as an anchoress (a hermit attached to a church) during the late 14th and early 15th centuries.  Her cell has not survived, but a chapel has been built on the presumed location, on the south side of St Julian’s Church, and there is a shrine to her there, as well as an information centre just up the hill from the church.  Julian (note – the name we know her by is the name of the church she was attached to; we don’t actually know what she was called) wrote the earliest surviving book in English by a woman, the Revelations of Divine Love.  This work was the result of a mystical experience when she was seriously ill and near death, and was revolutionary in its emphasis on God as ever-loving (not a concept the medieval church embraced).  It survived though convoluted channels of transmission in the UK and Europe, mostly treasured by nuns, and in the 20th century became a classic text of Christian spirituality.  Perhaps the most-quoted line is “All shall be well, and all shall be well, and all manner of things shall be well.” 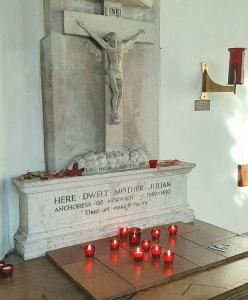 This part of Norwich is becoming the Writing Quarter, with the National Centre for Writing now based here, and with the history of the first female author in English at St Julian’s.  And from 2020 the Norwich Printing Museum (formerly the John Jarrold Printing Museum) will be relocating to new premises in the restored St Peter Parmentergate Church on King Street.  The collection tells the story of the printed word since the middle of the 15th century when Johannes Gutenberg invented movable type for printing and the age of the printed book was born.  For anyone interested in the written word, a short walk around King Street in Norwich will take you from Julian’s quill, to the printed book, to the laptops of today’s writers.