My pride and joy is a vintage Singer sewing machine.  It’s black and gold, is so heavy that I can hardly lift it, and celebrated its 90th birthday this year.  Built to last in an era when built-in obsolescence had not yet been invented, it is a design icon which truly changed the world, and every time I use it I am captivated again by its story.

Up to the middle of the nineteenth century, all sewing was done by hand.  There was no alternative to hand-stitching – every seam of every garment made, ever, in all of human history, was hand stitched.  Then, a flurry of inventors created a variety of ‘sewing engines’, which could sew much faster than any human hand.  The most enduring of these designs was patented in 1851 by Isaac Merritt Singer of New York.  A gifted salesman, he created a network of showrooms where the machines were demonstrated, showing both that they were easy to use (‘so easy a woman could use it’ – not a slogan that would, one hopes, sell many products these days, but in its time very effective) and also that clothes sewn by machine were at least as good as those sewn by hand. 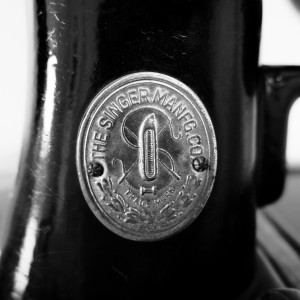 Singer’s two main markets were commercial – garment manufacturers – and domestic.  It was in domestic sales that the sewing machine created a revolution.  Diaries kept by American women in the 1860s showed that they were spending the equivalent of two days a week on making and repairing clothes for their families.  A sewing machine saved up to 90% of that time, giving them opportunities to earn money either through sewing for other people or by working outside the home. 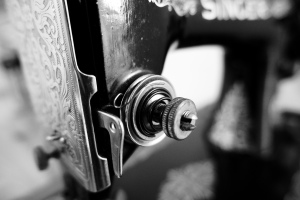 It wasn’t just the machines themselves that changed the world – it was the way they were sold.  In the 1870s, these expensive pieces of kit were worth the equivalent of half a year’s salary for a typical worker.  Singer introduced the idea of hire purchase, where an initial deposit and regular payments would enable people to own and use a machine they would otherwise not be able to afford.  Sales boomed, and modern consumer spending was born.

Supported by a reputation for reliability and a good parts and maintenance network, by 1918 it was estimated that one in five households in the world had a Singer sewing machine.  Yes, you read that right – one in five households in the world, for it didn’t take long for the Singer company to realise that there was a market far beyond the USA.  It started its international expansion in the United Kingdom, initially manufacturing sewing machines in Glasgow, and 1882 construction started on a new factory at Kilbowie, on the banks of the River Clyde, where John Brown’s shipyard was already a major employer of skilled workers.  The Singer factory, which at the time was the largest factory of its kind in the world, was a catalyst for the development of the town of Clydebank, and it was in this factory that my Singer sewing machine was born. 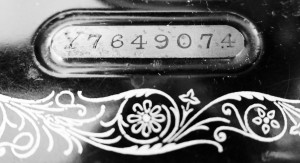 By tracing the serial number which each individual machine has, it is possible to find out exactly where and when a Singer was manufactured.  Serial number Y7649074 was part of a batch of 20,000 model 99K machines made in the Kilbowie factory in January, 1930.

In 1930, the Great Depression had taken hold following the Wall Street Crash of the previous year.  In January, Buzz Aldrin (one day to be the second man to walk on the moon) was born in New Jersey, and Mickey Mouse made his debut in a comic strip.  Over the next few months, the planet Pluto would be discovered, and elections in Germany would see Hitler’s National Socialists become the second largest party in the Reichstag.  Sliced bread would appear in British shops for the first time, Sellotape (Scotch tape) would be invented, and Clarence Birdseye would sell the first frozen food.  Against this backdrop, my sewing machine emerged from the last of the 56 departments in the Singer factory, its black japanned cast iron body gleaming, the gold leaf bright and fresh, its mechanism oiled and ready for action.  I would love to know who first owned it – who first excitedly turned the key to open the domed Deco-style box – whose hands first threaded the needle, wound the bobbin, turned the handle – who first proudly wore a garment created on this machine, what that garment was, what fabric, what colour.  I imagine children’s clothes, the curtains for a first home, a dress to wear to the dance, the changing fashions and fabrics of more than six decades.

My Singer came to me in the mid-1990s, in Salisbury, Wiltshire.  I had spotted it in the window of the sewing machine shop near where I worked, advertised as ‘refurbished’.  I was given it as a birthday present, and it’s one of the best presents I’ve ever had.  A quarter of a century later, it’s still in regular use.  It only has one stitch – a straight stitch – and it only stitches forwards (later machines had a reverse function), so modern stretch jerseys present it with some challenges, but for many years I made most of my own clothes.  I remember the first thing I made was a black velvet longline jacket, which I wore for years and years until it finally disintegrated.   These days, my Singer produces curtains and alters clothing, and it’s especially good – when fitted with the right needle – for shortening denim jeans.  Even though I neglect its maintenance, I have only once had to take it in for a service, because it was sticking – the guy who serviced it told me off for not cleaning the fluff out of the works more regularly! 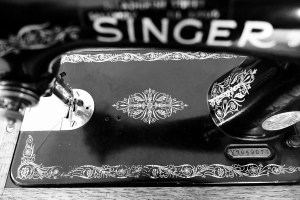 I said at the start that the Singer sewing machine was built to last.  Sadly, the affordable high street fashions of the mid-twentieth century and the advent of competition from Japanese, German and Italian manufacturers after WWII contributed to the end of Singer company’s success.  The Kilgowie factory closed in June 1980.  Together with the closure of the John Brown shipyard a few years earlier, this led to Clydebank becoming a post-industrial ghost town in the Thatcher era.  A recent (2019) BBC television documentary (The Singer Story: Made in Clydebank) interviewed a number of former employees of the Singer factory, reminiscing about its glory days.  Their pride in their work, and in the machines they produced, shone out, and I was especially struck by the words of Anna Stones, who worked in Department 55 (the parts department).  She said “You were proud to be making a small part, and to know that it was going to be a Singer sewing machine, and that it was going to give somebody so much pleasure, and was going to be sent all over the world.”  I hope Anna would be happy to know how much I love my machine.

The documentary also traced the continued use of the early twentieth-century manual and treadle (foot operated) machines into the present day all over the world, including through charities like Tools For Self Reliance who collect vintage machines, refurbish them, and send them to (often women’s) development projects around the world where they become the means for people to become economically independent.  The programme interviewed young women in Accra, Ghana who were excited to have the means to become self-employed as seamstresses, equipped with Singer sewing machines just like mine.  Here’s to the Singer sewing machine – the machine that changed the world, and still goes on changing it, one stitch at a time.